Why is Your Positive Change Being Met with So Much Resistance?

The emotions Targets feel during an organizational change can easily be compared to a monster roller coaster.  There are ups, downs, curves, slow climbs, fast descents, unexpected speed changes, and head-snapping starts and stops.  But we know what you are probably thinking.  You think this time it is going to be different because this change is a positive one!  It is going to make things better for everyone involved.  So why are people still grumbling?

It’s All About Frame of Reference

An important point to remember during any change, whether it is perceived as negative or positive, is that different people will have different reactions to the change.  The truth is that what's positive to you or your senior leaders may not be so positive to the Targets of the change. From their "Frame of Reference," the change may create a lot of uncertainty and disruption.

There are various methods to diagnostically measure the level of disruption from the Frame of Reference of each Target. The easiest (and most often overlooked) technique is simply asking questions and then listening to the answers. Radical, right!?! Other methods include (but are not limited to):

No matter what technique you use, remember that no communication should go out without a feedback loop attached to it. It’s an excellent way to gather information about sources of resistance to change. to their habits or patterns {Tweet This}.  Remember, resistance is a function of the amount of disruption the change creates for the individual. It’s a way for people to protect themselves against changes in their job tasks, work behaviors, performance measures, power and/or status. In fact, you can anticipate that the more someone believes their current habits and patterns will be impacted, the greater the degree of resistance you will face.

If you are dealing change, whether it is perceived as negative or positive, utilizing a structured approach such as IMA’s proprietary Accelerating Implementation Methodology (AIM) can help.  Here are some tactics from AIM on how to handle resistance to positive changes:

If you are going through an organizational change, even if it is being perceived as positive, resistance is unavoidable. It may be out in the open, or lurking in a dark corner. But trust us... it’s there.  If you take the time to surface resistance, understand it, and then manage it, your implementation has a much better chance at full optimization. 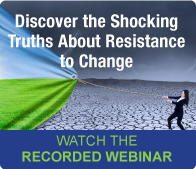