9 Effective Tactics for Managing Resistance to Change: Do What Works

If you are going through an organizational change, no matter how big or how small, whether it is being perceived as negative or positive, resistance is unavoidable. It may be out in the open, or lurking in a dark corner in the break room. But trust us... it’s there. Resistance is a function of the amount of disruption a change creates for an individual. It’s a way for people to protect themselves against changes in their job tasks, work behaviors, performance measures, power and/or status.  If you are a Change Agent, you can anticipate that the more someone believes their current habits and patterns will be impacted, the greater the degree of resistance you will face.

While it may be tempting to deal with the frustrations of resistance to change by punishing the offenders, this tactic is doomed to fail.  It's totally counter-productive and will only serve to strengthen the resistance.  Below we’ve listed a few other behaviors that are sure to only serve to worsen the situation:

The truth of the matter is you will never combat, solve or overcome resistance to change.  Sure it's frustrating, especially when you think your change will make things better for the people who are affected by the change. But, in our 30+ years of experience in change management training and change management consulting, we know it is much more useful to try to manage resistance rather than trying to squash it.

How to Manage Resistance

So, what can you do in order to manage this unavoidable resistance to change? Below are 9 effective tactics and strategies from the Accelerating Implementation Methodology (AIM); a structured, practical change management process for the human side of organizational change that Reinforcing Sponsors and Change Agents can use to manage resistance while it is occurring.

Remember, you will never combat or overcome resistance to change. Approaches such as discounting resistance, denying it exists, or trying to beat it down, ironically only serve to worsen the situation.  Instead, take the time to surface resistance, understand it and then manage it.  So now we ask you, what’s being done in your organization to manage resistance to change?  Is it effective? 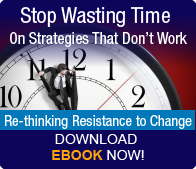