Over the next several weeks we'll be unlocking the secrets to managing resistance to change. You've seen resistance; it comes in many forms and can be out in the open, or lurking behind people that say they are supportive but then don't match actions with words. In this first week's article, we'll cover some of the basic concepts and then move to more specifics-- what kind of resistance to expect on your business changes, how to deal with resistance to change--all the nitty gritty that you want to know about this oft talked about topic.

Just this morning, in fact, we had an email from a client who has been working on introducing a new tool and is being met with resistance from one of the locations impacted by the change. She's very frustrated because she keeps reaching out to her colleagues who initially agreed to be Change Agents, and her attempts are being met with deafening silence.  The communication goes out, but nothing comes back!

If you are frustrated or flummoxed by why your change is being met with resistance, here are 10 important things you should know:

1.  Levels of resistance are a reflection of how disruptive a change is perceived to be. Because of this, it's important to be able to identify the level of impact for each Target group impacted by the change.  This will include Sponsors, Change Agents, and Targets. Disruptions will be different. For this reason, we use "key role mapping" to identify all the impacted groups, and then identify how disruptive the change is.

2.  Resistance will be greatest among groups of individuals who believe they are better personally served by the status quo.  The AIM change management methodology principle states that you can expect the most resistance from those people with the highest "vested" interest in things remaining the same.  For some individuals (and this includes the Sponsors themselves) the current state is much better for them personally than the future state.  Shared Services is a great example of this phenomonon.

3.  The greatest resistance to a change is usually in the middle to upper levels of organizations, not at the "front-lines" of the change.  It's often these individuals that have the most to "lose" in terms of power and prestige.  The disruption to the current power structure is directly related to the level of resistance you can anticipate in the management ranks.

4.  Even if a change is perceived by corporate Sponsors to be "positive," there will be resistance based on how disruptive the change is perceived to be.  What's "positive" to one group is not necessarily true for everyone impacted by the change.  The on-going challenge is to understand all the multiple Frames of Reference-- it's putting yourself in the shoes of your Targets to see what the change looks like from all the differing vantage points--differing roles, differing functions, differing geographies, etc.

5.  Resistance to change isn't "good" or "bad" but it will slow down your implementation if left unmanaged.  In an age when speed of implementation is so important, organizations can ill afford to have changes start and stop.  When this happens, trust and credibility go down, for this change and for future changes.

6.  Resistance to your current change may stem more from previous failed implementations than from "dissatisfaction" with the current change.  So often leadership is taken by surprise when they become aware of resistance, not realizing that poorly managed implementations have a long-term, residual impact.  The frustrating truth is that the resistance you encounter today may be due to a change that failed several years ago!  So success on your current change portfolio becomes even more important, because failure will carry over.

7.  You will get resistance from the process of how a change is implemented as much as about the content of the change.  The "how" is as important as the "what."  One of the values of the structured implementation approach is that it ensures the "how" is consistent and as comprehensive as is required for risk mitigation and implementation success.

8.  You will never eliminate resistance by piling on logical and rational explanations for why the change will be good for people.  The list of "logical" changes that have failed is long-- unfortunately, people are not motivated to adopt new cultures, systems and/or processes just because they are seen as "logical" from the 50,000 foot corporate perspective.  While the fallback answer is often "more communication," or more training, we know that neither alone will eliminate resistance.

9.  Managing resistance is not a one-time event.  Depending on where you are in the project lifecycle, the types of resistance that you see will be different.  If resistance levels are in fact directly related to how disruptive the change is, it makes sense that the nature of the resistance and the amount of the resistance will vary as the disruption varies. This is why resistance management isn't as simple as just completing a checklist and it needs to be an ongoing activity.

10.  If you don't see any resistance don't assume you have none.  When resistance goes underground you'll need to find ways to bring it out in the open.  So often resistance is covert rather than overt, but it is still resistance!  The driving force for having a "feedback loop" attached to every communication is to bring the resistance out in the open so that you can identify its source and strength. What may surprise you is that by encouraging the dialogue, you may actually encourage innovation and risk-taking. Conversely, if you consistently punish resistance you'll be encouraging a culture of maintaining the status-quo.

What examples of resistance have you encountered recently, and what have you done about it? 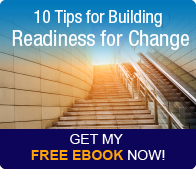