The CAST of Characters for Implementing Organizational Changes

Suppose one day you have a great idea for an improvement or process change.  How will you introduce this change into your organization? You can champion this stroke of brilliance, but to get the idea actually implemented, you'll need a Sponsor. Someone with the requisite power and authority to provide you with resources!  So you go to your potential Sponsor who can authorize the change, and you sell your great idea. You now have an Authorizing Sponsor. If you're able to sell it, your Sponsor will likely say,"Wow, that is indeed a great idea.  Go make it happen!" Now you are not only a Champion, you are also an Agent.  And if you have people who report to you who must change as a result of your wonderful improvement, you are now also a Reinforcing Sponsor. Don't forget, you will need to change too.  So you are also a Target!

In the implementation of an organizational change, everyone has a role.  In fact many people have more than one role. One of the reasons for weak or spotty implementations is simply that people are unclear about what role they are playing, what their responsibilities are, and how their role impacts the success of the implementation.

Gaining clarity around roles and responsibilities is basic, but critical for implementation success.

To make it clear to everyone involved, here's the breakdown of the four major roles--what we call the CAST of Characters for change-- Champions, Agents, Sponsors, and Targets.  Get it?

We often see confusion in implementation roles.  Here is how we define the roles in the Accelerating Implementation Methodology (AIM): 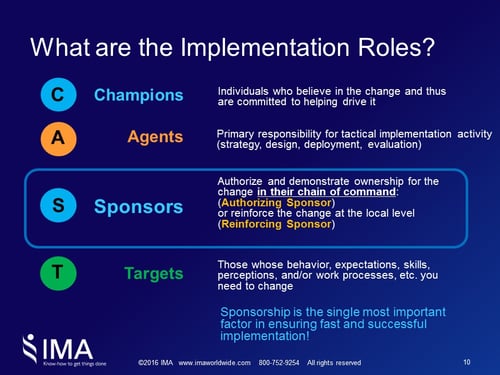 In major changes, there is always an overlap of roles.  We say that "everyone is a Target first."  This includes Sponsors!

If you as the Agent don't treat Sponsors as Targets first (meaning that you don't focus on the disruption from their Frame of Reference, understand their motivation to change or provide some motivation, understand the sources of their own resistance and manage that) they remain Targets forever.

An individual's ability to act in any other role (Sponsor or Agent) is completely dependent on whether you have gained the individual's compliance or commitment as a Target first!

In other words, a leader may have the label of "Sponsor" but is still acting in "Target mode." The overall goal in any change is getting the right Sponsors doing the right things cascaded down and across the organization.

The relationship of these four roles at any point in the project lifecycle is critically important. For example, don't confuse Champions with Agents.  Champions are wonderful to have and are needed, but they are not charged with executing the change!

When everyone has the same definition of the CAST of characters, you are better positioned for implementation success.