Sponsorship: What is it? And Why do You Need it?

Generating Sponsorship is just one element of IMA’s proprietary Change Management Methodology, Accelerating Implementation Methodology (AIM). But, (and we cannot emphasize this enough), it is the most important factor in ensuring a fast and successful implementation. So, what exactly is Sponsorship? And why is it so important to implementation success?

Before understanding why Sponsorship is so important, it is essential to understand exactly what it is. During the implementation of any organizational change, everyone has a role. In major change, these roles will overlap. People can and will play multiple roles during a change.  In the AIM Change Management Methodology we define the 4 most crucial roles as a CAST of Characters: Sponsorship is Action and Position

Let’s take a closer look at Sponsorship. Sponsors authorize, legitimize and demonstrate ownership for change. It is not a voluntary position. Nobody can raise their hand and say, “That’s a great idea, I’ll sponsor that project!” You are automatically a Sponsor if you have people reporting to you that are impacted by the change. That’s the position part. But, remember Sponsorship is both action and position.

There are three very specific actions every Sponsor must demonstrate visibly to drive the adoption of change. It’s important to remember that leaders reinforce the behavior of their own direct reports through what they reward, and what negative consequences they put in place. This is exactly why Steering Committees are not a substitute for Sponsors—they do not have the authority to apply reinforcements.  You can use Steering Committees as decision-making bodies, but you will still need to have Sponsors at each level of the organization, and in every area impacted by the change.

It’s easier to prevent a black hole than dig out of one. So, if you don’t take the time to build the cascade of Sponsorship, when you flip the switch at the top of the pyramid, the lights won’t come on!To drive change faster, leaders must cascade the change down through the organization. Think of it like a stair case where the change moves down one step at a time. If you miss a step, the change can fall into the famous “black hole of failed changes, never to be seen again.”

6 Sponsor Tasks that Can’t Be Delegated

One of the greatest risks to successful implementation is when Sponsors believe Change Agents should be able successfully implement on their own, and therefore attempt to delegate their responsibilities to the Agents. Here are 6 specific tasks that Sponsors cannot delegate to Change Agents: If we’ve said it once, we’ve said it a million times! Generating Sponsorship is the most critical success factor in ensuring a fast and successful implementation of any type of business change.   In order to generate ROI on your change project, you need to spend the majority of your time building a cascade of Sponsors at each level of the organization. Without it, you may have a project that may look like it is done, but never achieves behavior change. If there is no behavior change, you haven’t changed anything! 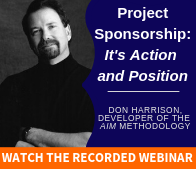