Full Speed Ahead! 4 Tips on How to Implement Change... FAST

A few weeks ago, the CEO of Ford Motor Company was fired.  The reason: the company was not moving fast enough to compete in the upcoming automated car market.  It’s a real world example why speed isn’t just a nice to have… it’s a business necessity. The need to do a better job of delivering faster, better change has never been greater.  Quite simply, organizations who are able to implement faster are one step ahead of their competition, ultimately meaning they are more successful. As a Change Agent, how do you manage this constant churn of change in an environment that doesn’t slow down for even a second?  As one of the participants in our recent AIM Accreditation program so eloquently stated, “The high-speed train doesn’t stop while we are trying to transform it.”

Change Management: Your Ticket to Speed

While Senior Executives and Project Managers often think “change management” is going to slow them down, the fact is that done right, it actually speed things up!  Every organization can become better and faster at implementing change by applying process, discipline, and rigor.  But, caution ahead.  By process, discipline and rigor we don’t mean just “doing” templates and checklists.  In our opinion, if an activity isn’t high impact and leading to speed, why are you doing it?

The Accelerating Implementation Methodology (AIM) is designed to use the limited resources you have to get the maximum amount of benefit out of your implementation in the shortest amount of time.  It is not a lock-step protocol.  Instead, it is meant to be used in a fit to purpose way.  It is a flexible process based on what is occurring at the moment, rather than what is next on the to-do list.  It’s principle based, so you are thinking through what to do based on the “hand of cards” you have in front of you at the moment.

Below are 4 tips from the Accelerating Implementation Methodology (AIM) on how to accelerate implementation:

The AIM change management approach is named Accelerating Implementation for a reason!  We know your organization is moving at the speed of light, so we built a practical, high-impact change management framework that ensures business-critical projects are implemented to achieve maximum benefit in the shortest amount of time.  Quicker. Faster. Better!  Full speed ahead! 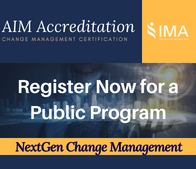