As change management and project implementation consultants, we’ve seen our share of unsuccessful attempts at change.  These failed implementations happen for a multitude of reasons.  Most commonly, organizations just don’t apply the same business-discipline and rigor for managing the human elements of their change as they do the timeline, the budget, and the technical objectives for the project.

In short, they confuse installation with implementation.  The lights go on; new technology and processes are in place, so they declare the project complete.  We like to call this, “premature project completion.”  What these organizations don’t realize is that if peoples’ behavior hasn’t changed, nothing has changed!

Change Agents play an important role in successful implementation.  It’s not enough to identify potential “Change Champions” because champions have no accountability.  Change Agents must know their role, and should be evaluated on their ability to implement the change project. Below we’ve put together a list of common Change Agent mistakes we see, and a few tips on how to avoid them.

Being Seduced by Activity

During any change project, it’s easy to get seduced into thinking that lots of activity means things are going well. But, Change Management is not about being busy; it's about focusing on the right actions at the right time.

Change Agents can't be effective if they are simply guided by completing checklists and templates instead of being led by principles that give directional guidance.  So, if change is on your agenda, forget the PowerPoint decks, the training programs, and the herds of junior consultants roaming freely through your organization. Instead, focus on defining the change, securing active Sponsorship and creating Reinforcement specific to your project.

Attempting to Implement Change Without Sponsorship

Sponsorship is the most critical success factor in ensuring a fast and successful implementation of any type of business change.  An attempt to implement change without it is destined for failure.  Instead, one of the most important tasks for a Change Agent is to ensure there is a cascade of demonstrated commitment by leaders, level by level across all the impacted areas of the organization.

But remember, Sponsorship is both position and action.  As for position, managers are automatically a Sponsor for every change that has an impact on their direct reports.  In fact, Sponsors can only Sponsor changes within their own area of authority.  But, in order to expedite change, Sponsors MUST express commitment to the change, model commitment to the new behaviors and reinforce the new behaviors on a daily basis with their direct reports.

If you are attempting business transformation, you should anticipate up-front that you are going to create high levels of disruption, and consequently high levels of resistance to change. Resistance is not logical, and it can’t be wished away. You will never combat or overcome resistance to change.  Approaches such as discounting resistance, denying it exists, or trying to beat it down ironically only serve to worsen the situation. Instead... take heed of our advice... resistance is there whether you see (or hear) it or not. In fact, if you have no identifiable resistance, you likely have an even bigger problem, because the resistance has gone underground! Take the time to surface it, understand it and then manage it.

One of the mistakes organizations often make is waiting far too long to start to build readiness for a business change, making building Readiness a reactive activity rather than a thoughtful plan. If you can build Readiness early in the project and continue while the change is going into effect, you’ll save yourself a lot of time, energy, and resources.  The fact is, you can either invest in building Readiness now, or you can spend your resources managing higher levels of resistance later.

Assuming a Change Will Occur in Isolation

Too often, Change Agents fail to understand that projects are competing for resources with all of the other changes occurring at the same time.  No change occurs in isolation. Your project isn't being introduced into some hermetically-sealed environment.  Instead, you are implementing your change into a climate that is being significantly shaped by what is going on currently, as well as perceptions of past experiences.

Mistaking a Communication Plan for an Implementation Plan

Mistakes can happen.  But one way of avoiding them is to use a repeatable process for implementing changes, such as IMA’s proprietary Accelerating Implementation Methodology (AIM).  AIM provides systemic, systematic principles, strategies and tactics that can be the central cog of every project lifecycle regardless of your project management protocols.  It serves as a robust planning and execution tool for the people-side of any implementation.  Using the AIM Change Management model is one way to avoid these common mistakes, and the best way to take a step in the right direction toward value realization for your change portfolio. 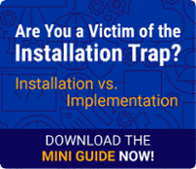