Understanding the Role of Sponsors in a Project Implementation

If I’ve said it once, I’ve said it a million times…Sponsorship is the single most important factor in a fast and successful implementation. But what exactly is Sponsorship? And why is it so important?

In the AIM Change Management Methodology, there are 4 critical implementation roles that create a CAST of Characters.

Now that you understand the different roles in an implementation, let’s take a closer look at the three different possible reporting relationships between Sponsors, Change Agents, and Targets. Each can be effective, however, the type of relationship must be identified and managed as part of your change management methodology framework to avoid potential risks and liabilities.

The linear relationship is the simplest, but least prevalent in today's complex organizations. This relationship starts with an Authorizing Sponsor at the top with the Change Agent directly underneath and the Target of the change reporting to the Agent. 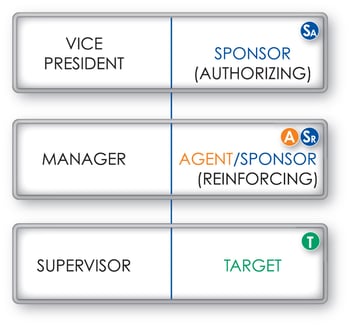 The linear structure is straight forward for sure. But it can cause complex issues. For example, let’s say a mid-manager has a good idea but does not have the funding or the authority to approve it. Until the manager obtains the boss’ permission and gathers the necessary resources, he or she is only a Champion of the change. The boss in this situation will become the “Authorizing Sponsor.”

When the boss says, “That is a great idea, go implement it with your subordinates” the original manager becomes the Agent with implementation responsibility for his or her direct reports who instantly become the Targets of this change.

But wait! The manager who originated the idea must also become a Reinforcing Sponsor because it is their direct reports who are the Targets. And, lastly if the change affects the mid-manager’s job responsibilities, they are also now a Target of the change! In this one, simple change our mid-manager has filled all 4 roles of Champion, Agent, Sponsor and Target!

Typically, here’s what happens in the Triangular configuration. The Sponsor, having been taught to delegate as much as possible, will instruct the Agent to “make the Target change.” The problem is…Sponsorship cannot be delegated to the Agent because the Agent does not control the reinforcement of the Target.

The Agent, having been given their instruction by the Sponsor thinks he or she has finally been given a real assignment. The Sponsor is confused: they think the task has been delegated. The Agent is confused: they think he or she has it. Guess who is never confused in this situation?!?! The Target! Why? because the Target always knows who controls the reinforcement, and that is their direct Sponsor.

Once again, the Sponsor having been taught to delegate as much as possible will say, “Go get those targets to change.” Until Sponsorship is secured from Sponsor #2 the Target will not change.

What is the lesson learned here? If you want someone to change, you must always impact the person who controls their performance.

The Cascade of Sponsorship

In order to accelerate a change, no matter which configuration you find yourself in, Sponsorship must be cascaded level by management level down the organization. If you skip a level; you automatically create a black hole. How do you ensure Sponsorship at each level? By treating each Reinforcing Sponsor as a Target FIRST. To do this you must understand:

• The disruption from their Frame of Reference

• Their motivation to change (or provide it through reinforcement)

• Their resistance and manage it

If you want a fast and successful implementation, nothing is more important than generating durable Sponsorship … nothing! So, no matter which Sponsor configuration you are working with, the moral of this story is very simple. If you are a Change Agent you need to spend less time looking down the organization worrying about convincing your Targets to change and more time looking up, leveraging each and every Sponsor to be actively Expressing, Modeling and most importantly, Reinforcing the change with their direct reports.